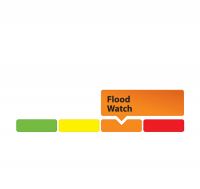 APRIL 18, 2019 OTTAWA RIVER FROM ARNPRIOR TO HAWKESBURY — Rideau Valley Conservation Authority (RVCA) in conjunction with the Mississippi Valley (MVCA) and South Nation Conservation Authorities (SNC) is issuing an update FLOOD WATCH for the areas under our jurisdiction along the Ottawa River.

River Conditions Forecast / Flooding Risk: Two low pressure systems are expected to bring 30 to 80 mm of precipitation over much of the basin from Thursday through to Saturday. At the same time, warmer temperatures will melt a large portion of the remaining snowpack in the central areas of the basin. Rainfall and snowmelt will combine to produce very high runoff, causing levels to rise sharply on the Ottawa River starting this Friday. Levels are expected to exceed major flood levels, which are the levels at which several houses are impacted, over the weekend in flood-prone areas along the Ottawa River. Levels as high as those seen in May 2017, at the height of the flood, could be reached depending on the amount of precipitation received. Due to the forecast uncertainty it is difficult to accurately predict how quickly water levels will rise and when river conditions may peak. Residents of flood-prone areas are encouraged to closely follow evolving conditions and to take necessary measures. The Regulating Committee will be reassessing forecast conditions and providing hydrological condition updates on its website daily at http://www.ottawariver.ca/forecast.php .

Residents are advised to stay away from watercourses where flows are high and where banks might be unstable. Parents are encouraged to explain these dangers to their children.

This FLOOD WATCH statement is valid through April 20, 2019. Additional statements will be issued when or if conditions are expected to change significantly from this outlook.