With High Snowpack, Be Prepared for Spring Flooding Across the Rideau Valley Watershed 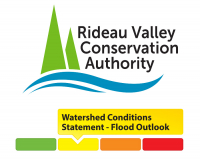 March 6, 2019 – The winter of 2018-19 has been an old-fashioned winter with lots of snow (over 250 cm to-date) and no significant thaw events. As such, the snowpack throughout the Rideau Valley Watershed is well above average. Current conditions at several RVCA snow course sites are indicating near record water content amounts in the snow for this time of year, generally not seen since the late 1970s.

Based solely on the fact we have above average water content, there is a potential for above average flooding this spring across the Rideau Valley Watershed, especially in low lying areas which have flooded in the past. However, the two other key factors influencing actual flood conditions are precipitation and temperatures as we move through March and into April. The current short-term forecast does not indicate any significant precipitation or above-seasonal temperatures; however, we know the daily temperature will begin to increase as we move through March.

Water levels on lakes and flows in the streams are presently at or slightly below normal for this time of year. Parks Canada staff who manage the water levels for the Rideau Canal have indicated that the levels will be maintained or lowered in the coming weeks to allow for water storage in the upper watershed lakes once the snowpack starts to melt.

With the changing levels that can be expected over the coming weeks, ice cover on lakes, ditches, local streams and rivers will continue to be unstable. Extreme caution should be exercised by everyone when near local waterbodies. Parents should inform their children of the risks and provide appropriate supervision.

As the temperatures start to warm up, there is also a concern for potential ice jams in local streams and rivers, as flows could quickly increase before the ice can melt. Residents are advised to monitor the river closely as spring progresses for signs of ice jams. RVCA staff will be monitoring conditions but we always welcome any unique observations from watershed residents.

There is also a concern for flooding along roadways due to current snow/ice build up on roadside ditches and some roads.

Residents in flood prone or low-lying areas, historically susceptible to flooding, should take the necessary precautions to protect their property, such as: