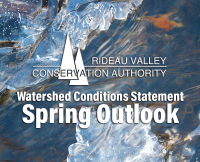 March 29, 2018 –  Barring a rain event not presently in weather forecasts, it is appearing that the spring freshet of 2018 in the Rideau valley may have already occurred on March 2 as a result of the above normal temperatures in the latter half of February that removed all of the snow.

The snow that fell after the early March thaw, has gradually declined over the month with several sunny days and above freezing daily temperatures. With little snow and minor rainfall forecast, there is not expected to be enough runoff to cause significant increases in water levels in the Rideau valley. A flow in the order of 115 +/- cubic metres per second (cms) is possible at the monitoring station Rideau River at Ottawa if the weather that is forecast for the next four days arrives. That would be less than 50% of the long-term average spring flow.

Such a flow would cause flooding of only the lowest lying shoreline in the watershed but no residential flooding. Still, waterfront residents are advised to secure any of their possessions that could float away and ensure that sump pumps are operating properly.

Colder temperatures and snow are forecast for next week which will prolong the passing of the freshet but there is nothing indicated that would raise levels significantly.

Rideau Valley Conservation Authority (RVCA) reminds the public to exercise extreme caution around all water bodies. Banks adjacent to rivers and creeks are very slippery at this time and, when combined with current weather conditions, pose a serious hazard. Parents are encouraged to keep their children and pets away from all watercourses and off frozen water bodies, which have been weakened as a result of the warming conditions.