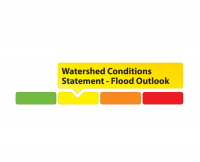 March 8, 2021 –The winter of 2020-21 is quickly coming to an end. After a mild start, February brought cooler temperatures. The watershed saw a significant rain event in late December, followed by below normal precipitation in January and above normal precipitation in February. Current conditions recorded at several RVCA and Parks Canada snow course sites are indicating normal water content amounts in the snow for this time of year. In general, water levels on lakes and flows in the streams are presently below normal for this time of year.

If the temperatures come as forecast, a significant amount of the snow is expected to melt across the Rideau Valley watershed which will make water levels and flows rise quickly and may result in flooding for low lying areas along all waterways, especially near small creeks and streams. Parks Canada staff who manage the water levels for the Rideau Canal have indicated that the levels in lakes are expected to rise in the upper watershed lakes as the snowpack begins to melt.

With the rising water levels that can be expected over the coming weeks, ice cover on lakes, ditches, local streams, and rivers will be unstable. Extreme caution should be exercised by everyone when near local waterbodies. Parents should inform their children of the risks and provide appropriate supervision.

Residents in flood-prone or low-lying areas, historically susceptible to flooding, should take the necessary precautions to protect their property, such as:

This watershed conditions statement is in effect until March 31, 2021, at 5 p.m. and will be updated at that time unless the forecast or conditions change.