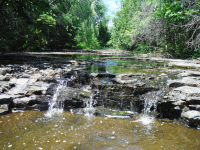 RIDEAU VALLEY, April 20, 2021 – Although nobody can predict the weather – and despite some recent rain – 2021 is shaping up to be an abnormally dry year across the Rideau Valley watershed if the current trend continues.

Rideau Valley residents enjoyed a relatively easy winter with warmer-than-normal temperatures in every month except for February. Combined with below-average precipitation and above-average temperatures in March, all evidence points to a dry year ahead.

Weather and water level conditions have been pointing in this direction since winter began in December 2020:

So, what does this all mean? All water levels and flows across the Rideau Valley watershed are currently well below normal for this time of year. Current flows on the Rideau, Jock and Tay Rivers and Kemptville Creek are all between 30 to 40 per cent of the typical seasonal averages. (For current and historical water level and flow information, see www.rvca.ca/watershed-conditions/streamflow-water-levels. For more information on low water conditions, check out this video: youtube.com/watch?v=-MIfvEDoDfs)

Flows on the Rideau River are routinely augmented by several reservoir lakes located in the upper watershed, west of Westport. These lakes store water in the spring and sustain flows throughout the drier summer months. Water levels and flows in the primary reservoirs (Bobs Lake and Wolfe Lake) are currently below normal for this time of year. Flow through lakes such as Christie Lake have also been affected and are trending well below normal.

Parks Canada staff are carefully managing the outflows in the reservoir lakes and have indicated that if we receive normal precipitation amounts over the next couple of months, lake levels are expected to gradually rise to seasonal averages.

Parks Canada staff also manage water levels and flows in the main body of the Rideau River from Big Rideau Lake through downtown Ottawa, including the Rideau Canal lock system. Parks Canada staff have indicated that navigation levels along this reach will be achieved by the long weekend in May. For more information from Parks Canada, see www.pc.gc.ca/en/lhn-nhs/on/rideau.

RVCA staff are currently preparing to meet with the Rideau Valley Water Response Team, which is made up of municipal and agency partners. The primary purpose of Water Response Team is to provide a forum for the sharing of information among water managers and water takers, and to facilitate co-operative decision-making on the conservation of limited water supplies at the early stages of and throughout drought events, as they occur.

For more information visit rvca.ca/watershed-conditions or email . For flood and drought news directly to your inbox, subscribe to our newsletters here: www.rvca.ca/about-us/join-our-mailing-lists.