(WCS-LW - 52/2020) September 2, 2020 — Watershed conditions in the Rideau Valley Watershed have returned to “Normal’ under the Ontario Low Water Response Program.

Parks Canada continues to closely monitor the water levels throughout the Rideau Canal system inside the Rideau Valley watershed. Water levels in the reservoir lakes, located in the upper reaches of the Rideau Valley watershed, are either normal or above normal (i.e., Christie Lake) for this time of year and are expected to decline but this will depend on rainfall amounts received in the coming weeks. Rideau River flows downstream of Big Rideau Lake are now near normal. Water levels in the Rideau River below Smiths Falls are within navigable ranges for this time of year.

December 24, 2020 — Environment Canada is forecasting between 30 and 50 mm of rain starting today and continuing overnight throughout the Rideau Valley watershed.

Although no significant flooding is anticipated, water levels and flows are expected to increase in all waterways in the Rideau Valley Watershed. Depending on how much rain falls, residents who are adjacent to the smaller creeks and streams are advised to keep a close watch on water levels and flows and should take the necessary precautions to protect their property, such as:

With the expected increase in water levels and flows in the coming days, ice cover on lakes, ditches, local streams and rivers will be unstable. Extreme caution should be exercised by everyone when near local waterbodies. Parents should inform their children of the risks and provide appropriate supervision.

This watershed conditions statement is in effect until Monday January 4, 2020 at 5 PM or until an update has been issued.

January 13, 2021 – Environment Canada is forecasting mild temperatures for the remainder of this week, with daily temperatures above zero each day and some rain expected on Friday and Saturday. This follows a warmer than usual December and a mild January to date. As a result of a significant rain event on December 24 and 25, water levels are above normal for this time of year in the some of the lakes and rivers in the Rideau Lakes and Tay Valley sub-watersheds. Generally, water levels are at normal levels for the remainder of the watershed.

Although no significant flooding is anticipated at this time, it is expected that water levels and flows will continue to fluctuate across the watershed with the continued warmer-than-normal conditions and forecasted rain later this week. As a result, ice thickness can change drastically and be unpredictable. The shoreline adjacent to lakes, rivers and creeks is also very slippery and poses a serious hazard. Falling into open water can result in hypothermia or drowning.

The RVCA reminds the public to exercise extreme caution around all waterbodies by: 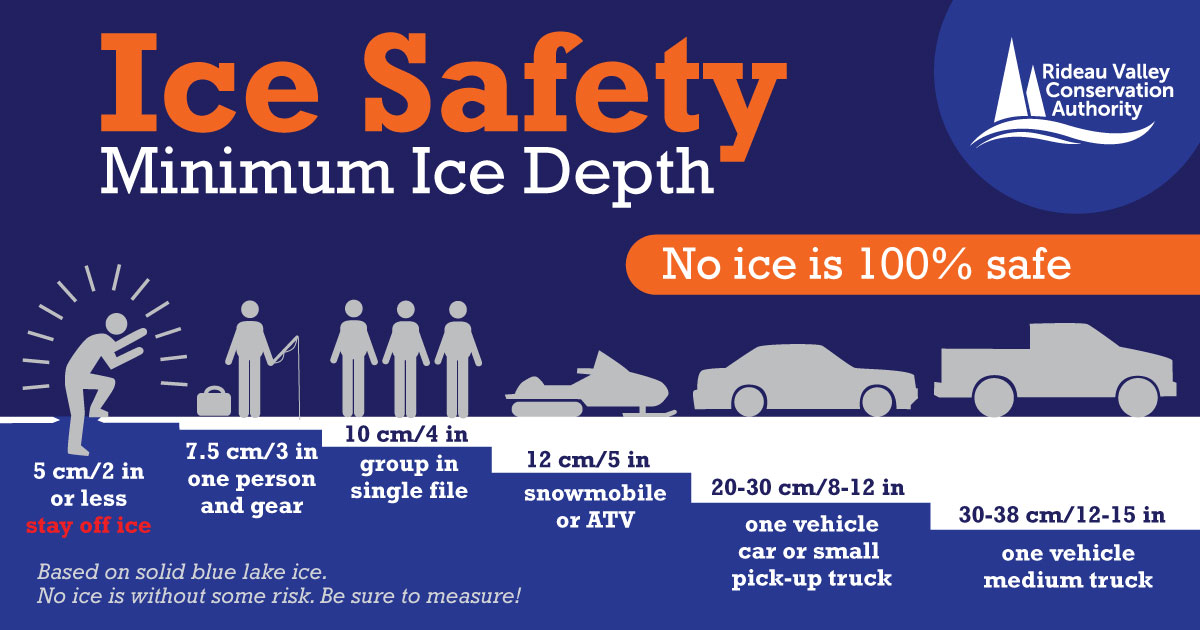 RVCA does not monitor or maintain ice conditions anywhere, including its 11 public conservation areas. This includes the Rideau River and its tributaries, as well as the ponds, lakes and other bodies of water within our parks.

This watershed conditions statement is in effect until Monday, February 1, 2021 at 5 PM or until an update has been issued.

January 29, 2021 – Environment Canada is forecasting very cold weather beginning today and continuing into Sunday before returning to normal range on Monday. This includes night-time wind chill temperatures in the range of -20 to -30 degrees Celsius. In areas where there is a lack of ice cover along with turbulent flow, these cold temperatures can trigger the formation of frazil ice which can accumulate quickly on bridge abutments, piers and riverbanks resulting in increased water levels and flooding in low-lying areas. The small rivers and streams with open water, such as the Tay River, are considered the most vulnerable for frazil ice formation, resulting in localized flooding. Please notify RVCA if any localized flooding is observed to due frazil ice formation by sending an email to .

Residents are advised to stay away from all rivers and watercourses in the vicinity of any frazil ice and high-water areas. Parents are encouraged to explain these dangers to their children.

This watershed conditions statement is in effect until Monday February 1, 2021 at 5 PM or until an update has been issued.