Since 2005, RVCA has been coordinating the Source Protection Program for the Mississippi-Rideau Source Protection Region (MRSPR). This work has involved undertaking a number of technical studies and the development of source protection plan policies for the MRSPR to protect shared municipal drinking water sources within our watersheds. Additional information about the local source protection program is available here: mrsourcewater.ca

Currently, the groundwater program at RVCA is small and primarily focuses on being a source of expertise for municipal planning services related to rural drinking water. The program also provides support to development applications near wetlands and groundwater recharge and discharge areas.

RVCA looks to learn more about our groundwater resources and their specific roles in the local hydrological cycle. We monitor and gather information at 16 wells at 13 locations in the Rideau Valley as part of the Ministry of the Environment and Climate Change’s (MOECC) Provincial Groundwater Monitoring Network (PGMN). The main goal of the PGMN program is to undertake long-term regional groundwater monitoring in order to be able to identify potential changes in groundwater quality or levels. RVCA also partners with provincial agencies, local municipalities and academia for special projects related to groundwater information management, subwatershed studies and groundwater surface water interactions.

The streams and rivers in the Rideau Valley watershed are home to a variety of plants and animals.

RVCA staff collect information on the physical conditions of the watershed — vegetation, wetlands, shorelines, land uses. We also look at fish communities and benthic invertebrates. We look see how aquatic and terrestrial creatures interact with their environment. All this information is used to create a picture of the conditions of our streams, lakes, rivers and overall watershed. In turn, this information will set the management direction for the future.

Information is compiled and summarized in RVCA catchment reports and subwatershed reports.

These monitoring protocols are being implemented by the City Stream Watch Program participants and by staff at the Rideau Valley Conservation Authority. Information is compiled and summarized in RVCA catchment reports and subwatershed reports.

The RVCA initiated a land cover classification program in 2009 to gain a better understanding of the spatial distribution of nine different land cover classes across the watershed.

Our current land cover dataset reflects 2008 imagery, but is being updated using 2014 photography. Through heads-up digitizing (following industry standard techniques), updates to this data are based on visual interpretations of high-resolution (20 cm) aerial photography (2008 and 2014 DRAPE imagery).

Both datasets are used for mapping and analysis for the City Stream Watch Program and in catchment and subwatershed reports. With data representing two different points in time, the ability to monitor and identify changes across the landscape has become a primary focus of RVCA’s land cover classification program.

Headwater drainage features need to be managed and protected to ensure that critical functions are not lost. RVCA staff collect field data on headwater features including flow regime, geomorphology, water quality, vegetation, organic inputs, invertebrates and fish habitat. This data is then used to classify the stream into one of five habitat categories for the stream reach. Management recommendations are then applied to the stream reach based on the assigned classification through the development process (i.e. plan review).

The City Stream Watch Program has been collecting data on Ottawa streams since 2003. 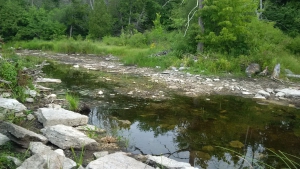 The drought status in the Rideau River watershed remains at “Severe” because sustained flows in the streams and rivers have not been restored.

As has been the case all summer, rainfall has been very erratic with significant amounts recorded at some monitoring stations and very little at others. There has been enough rain in the last two weeks to make many watershed residents forget that there is still a drought. Lawns are green. Farm crops are close to being ready for harvest.

Recent heavy but localized rain was not sufficient to change the drought status in the Rideau River watershed from “Severe.”

Streamflows and lake levels continue to decline throughout the watershed. At the climate station at Kemptville, 44 millimetres of rain was recorded on September 10. Both Smiths Falls and Rideau Ferry received 26 but all of 2 mm was recorded at the station at Innisville east of Perth. Where the heavier rainfall occurred, levels increased but they quickly fell back to where they had been.

Staff Directory  Board of Directors

Rideau Valley Conservation Authority promotes a volunteer program called CoCoRaHS which stands for Community Collaborative Rain, Hail and Snow Network. It’s a non-profit network of volunteers who measure and map precipitation. This network started at the Colorado Climate Center at Colorado State University in 1998 and has expanded into Canada.

We are looking for volunteers that can record precipitation and enter the data into the CoCoRaHS website or App. Recording includes reading a gauge daily and can also include measuring snow in the winter months. Measuring locations are ideally areas that are open and not surrounded by trees or buildings as they interfere with the precipitation amounts.

CoCoRaHS is standardizing the data collected by having everyone use the same precipitation gauges. The gauge is offered at a discounted cost of $30 if you sign up on the CoCoRaHS website, however RVCA has a couple of gauges that we can give out.

Excellent videos on how to do everything and what CoCoRaHS is looking for:
CoCoRaHS in Canada
CoCoRaHS HQ

Published in Get Involved
Tagged under
Read more...
September 07, 2016

Watch for dates to help us plant trees and shoreline shrubs. Our Shoreline Naturalization Program, City Stream Watch Program and various other special projects often look for people to help.

Rideau Valley Conservation’s stewardship projects offer opportunities to get your hands dirty while taking action in your community. We partner with private landowners, watershed residents, municipalities, and agricultural and academic communities to protect and enhance our natural environment. From habitat enhancement, to tree plantings and clean-ups, your efforts will have an immediate and positive impact on the local environment, and contribute to long-term sustainability.

Winter 2016 took an unusually long time to arrive and has had trouble staying. Now it looks like it may be leaving early.

A record snowstorm on February 16, some rain on the 24 followed by cold has made for a frosty start to March. Conservation Authority staff measured the snow on the ground on March 1 finding the depth and water equivalent to be slightly above the historical average. The snow that fell on Tuesday night and into Wednesday has increased the snowpack to about 25 percent above normal for the time of year.

Weather forecasts indicate that temperatures will rise through the coming weekend and into next week to above freezing with little precipitation. That trend is expected to persist for at least the next two weeks. Generally, spring is forecast by The Weather Network to be warmer than normal and drier although there is the possibility of some further snow events and brief periods of cool temperatures.

If the warm temperatures come as forecast, much of the snow can be expected to be melted and water levels and flows to rise gradually over the next two weeks. This gradual process is expected to bring a minor peak with only low-lying areas along rivers and lakes likely to be inundated this spring.

City of Ottawa crews have begun the annual ice removal program on the Rideau River between Bronson Avenue and Rideau Falls. With the thaw expected next week and thinner ice than usual to start with, it may be easier going than in past years (more information: City of Ottawa information at 311).

Water levels on lakes and flows in the streams are presently at or slightly above normal for the time of year as a result of the January weather and thaws that happened through February. With the changing levels that can be expected over the next weeks, ice cover on lakes, ditches, local streams and rivers will be increasingly unstable. Caution should be exercised by everyone when near local waterbodies. Parents should inform their children of the risks and provide appropriate supervision.

Water Safety – High flows, unstable banks, melting ice or other factors that could be dangerous for recreational users such as anglers, canoeists, hikers, children, pets, etc. Flooding is not expected.

Flood Outlook – Early notice of the potential for flooding based on weather forecasts, calling for heavy rain, snow melt, high winds or other conditions that could lead to high runoff, cause ice jams and/or lakeshore flooding or erosion.

Flood Warning – Flooding is imminent or already occurring in specific watercourses or municipalities.

With a definite declining trend of the water levels of Bobs Lake and Christie Lake, the Flood Watch that has been in effect specific to those lakes since April 11 is now cancelled.

With little precipitation over the last two weeks and, therefore, declining inflow to contend with, Parks Canada staff have been able to gradually bring the levels of both lakes back down to target operating ranges.

Water levels in the rest of the watershed are also decreasing and are close to averages for the time of year. However, the water is still relatively high and is cold. Caution is advised for anyone who has reason to be around water and children need to be warned of the risks.

RVCA will continue to monitor conditions and will issue further statements when or if there is an indication that conditions can be expected to change significantly.

Water Safety – High flows, unstable banks, melting ice or other factors that could be dangerous for recreational users such as anglers, canoeists, hikers, children, pets, etc. Flooding is not expected.

Flood Outlook – Early notice of the potential for flooding based on weather forecasts, calling for heavy rain, snow melt, high winds or other conditions that could lead to high runoff, cause ice jams and/or lakeshore flooding or erosion.

Flood Warning – Flooding is imminent or already occurring in specific watercourses or municipalities.